Primare has been revamping its entire range of specialist audio components, and the i15 Prisma is the Scandivian firm’s all-new integrated amplifier. But don’t be fooled by the amp’s compact dimensions …

The Swedes know all about stylishly minimalist design. Theirs is a pared-down approach that frowns on frippery, and focuses on the essentials only.

It also demands that those essentials are perfectly, meticulously executed, and exude an honesty of purpose that vindicates the apparent simplicity of the design. It’s a classic case of form remaining consistently cognisant of function.

Primare is a brand that epitomises the Swedish design ethos perfectly. Immaculately understated, its components exude a timeless aesthetic that is distinctive, with a hewn, crafted solidity to match.

The i15 Prisma is part of Primare’s all-new range, and introduces a more compact form factor for ‘entry-level’ models. At 350 mm wide, it’s scaled down about 25 percent compared to the typical DIN-sized components we’ve become accustomed to. But smaller by no means suggests inferior in this case.

Size apart, the i15 Prisma remains true to Primare’s design ethos. If you’re familiar with the marque’s products, you’ll recognise the solid, all-metal casework, and the prominent, round-cornered fascia, with its central OLED display, and the small, round soft-touch buttons.

The look is, as already mentioned, minimalist in the best Scandinavian tradition. The i15 rests on a trio of chrome-trimmed isolating feet, and since this is the Prisma model, you’ll also notice a pair of antenna protruding from the rear.

Those antenna look after Wi-Fi and Bluetooth, and join a fairly crowded rear panel – one drawback of the smaller form factor. If you’re a committed analogue source fan, you might also be disappointed by the presence of just one pair of RCA analogue inputs.

There is also a dual-purpose 3,5 mm minijack input that can operate as both an analogue and a digital input, but yes, if you have a long list of a analogue gear to hook up, the i15 Prisma is not for you.

That aside, this is an immensely versatile little amp (and by little, I’m referring to the unit’s physical dimensions, not its sonic signature). It offers four digital inputs, plus the dual purpose minijack already mentioned.

The presence of a Wi-Fi antenna and Ethernet port also confirms the Primare amp’s ability to be linked to a network, which provides Internet connectivity for access to Internet radio and streaming services, as well as to the content of any NAS devices on the network.

The i15 offers fuss-free Bluetooth connectivity, as well as Apple AirPlay playback. It also comes with integrated Chromecast, which allows access to an extensive catalogue of music streaming services, Tidal and Qobuz among them, via the Google Home app.

Chromecast means the i15 will be able to communicate and share content with other Chromecast-integrated devices, opening the door to multiroom applications. There’s even voice control via Google Assistant.

Finally, the i15 is compatible with Spotify Connect, further extending its list of potential sources. 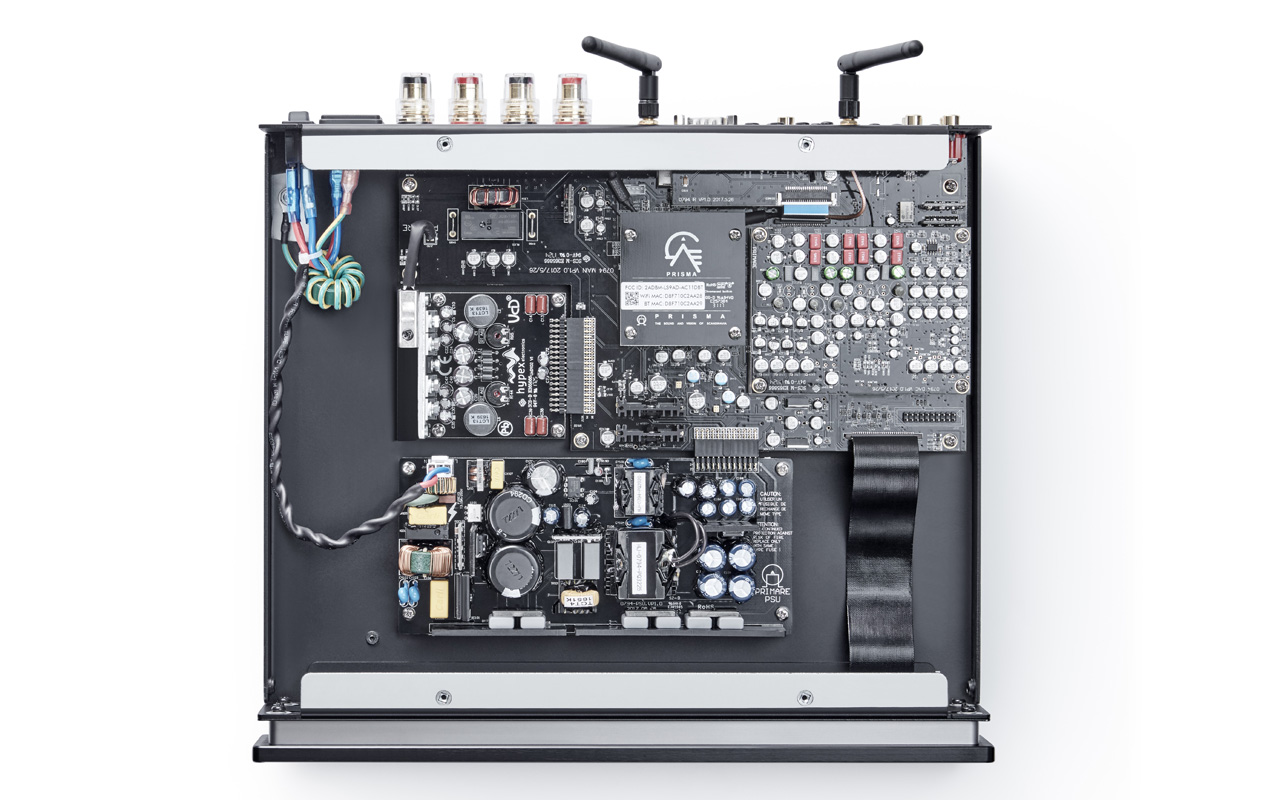 The i15 might be compact, but it packs 60 watts of power per channel, thanks to a pair of Hypex UCD 102 power amp modules. These Class D devices differ from Primare’s own UFPD 2 amplifier modules, but offer keener costing thanks to greater economies of scale.

Power is delivered by a fast switch-mode power supply offering stable voltage despite demand swings, while capacitors add a buffer that allows the i15 to cope with sudden transient bursts.

On-board digital to analogue conversion is provided by the AKM AK4490EQ chipset, offering 32-bit processing and supporting sampling rates of up to 768 kHz and DSD at 11,2 MHz, albeit via the USB Type B input only. Coaxial and Toslink inputs don’t reach beyond 192 kHz/24-bit PCM signals.

Most of the popular lossy and lossless music file formats are supported, including WAV, LPCM, AIFF, FLAC, ALAC, MP3, MP4 (AAC), WMA and OGG. DSD128 is supported by the USB Type B input as well as via WiFi, Ethernet, and storage devices connected via the USB Type A input.

The i15 was used to power a pair of KEF LS50 bookshelf speakers, with much of the listening done using the amp’s streaming capabilities to access Tidal high-res files, as well as music stored on a Synology NAS.

The Primare was linked to our network via Ethernet to ensure a stable connection for high-res files. However, it worked perfectly well using a WiFi connection instead. Bluetooth pairing was easily and seamlessly achieved, too.

The evaluation unit arrived brand new, and was allowed to settle in for the first 100 hours or so before the review was embarked on in earnest.

While the i15 is supplied with a conventional and well executed remote control handset, I found the Prisma app offered an intuitive and informative gateway to the i5’s features and capabilities.

As already alluded to, don’t be fooled by the compact footprint of the i15 – it doesn’t sound anything like that at all. Instead, it has a big, and generous, and visceral delivery– more like one of those big and beefy, defiantly analogue amplifiers we all used to like so much 20 years ago (and still do).

It’s clear that the 60 watts per channel that Primare rates this most junior member of its amplifier line-up at is conservative, even taking the efficiency of the partnering KEF LS50s into account. Indeed, as a quick aside, the Primare/KEF combo is a marriage made in sonic heaven.

There’s a richness of tone and texture to the Primare’s performance that endows the music with presence and body. Acoustic guitars are presented with a fullness of timbre and a clarity of character that is goose bump-inducing, pianos display just the right balance of percussive intent and lyrical flow, and vocals sound, well, authentic and downright real.

In that sense, the Primare goes about its business with distinctly un-electronic approach: this is an amplifier that focuses on making the music come alive in all its emotive, charismatic, all-embracing glory.

Part of the i15’s magic is its ability to make the most of what it’s being offered – to musically contextualise the analogue and digital information it is being presented with.

Yes, there is loads of detail, and a wide-open soundstage provides full and unencumbered access to the music. But it’s the sense of authenticity – the joy of being able to savour the performance as a whole, rather than seeking out and isolating specific elements – that makes the i15 so compelling.

On ‘The Nearness Of You’, from the Tsuyoshi Yamamoto Trio’s Midnight Sugar, that sense of immediacy and ‘being there’ was perfectly illustrated. The piano sounded splendidly vital, thanks to the recording’s ability to grasp the instrument’s bright and cheerful approach, while also capturing the dynamics and percussive impact.

The stand-up bass may be in a supportive role here, but it was presented with verve and clarity, allowing the listener to closely follow and enjoy the dialogue between piano and bass. The lower registers were delivered with surprising power and intensity, yet never threatened to overpower the piano’s sparkle.

The lucidity of the recording also allowed the articulate percussion to come into its own, so that the subtlest brush of the snare and every cymbal’s shimmer were done full justice, with the kick drum’s steady, solid thump providing the rhythmic backbone.

The remastered, SACD version of Roger Waters’ classic, if somewhat self-indulgent Amused To Death remains not only musically immersive, but also a stern test of system staging and imaging. It’s a challenge the i15 passed without breaking a sweat.

The amp managed to make the most of the music’s sonic panoramas, enveloping the listener in a 360-degree soundscape that often creates an almost surround sound-like impression.

It’s also a busy recording, with loads of effects and spurious voices, and yet the Primare was never intimidated, always remaining in control and presenting the various elements with composure and clarity.

‘Late Home Tonight’ showed off the amp’s ability to find just the right balance between the sleek acoustic guitars, the sweeping synths and the soaring strings spread wide and deep across the soundstage, and Waters’ centrally focussed vocals.

It also easily coped with the various effects and the eventual, climactic explosion at the end of the track – the latter delivered with enough intensity to get you jumping right out of your seat.

The Trondheimsolistene’s superbly recorded rendition of Mozart’s Violin Concerto in D Major really propels the listener into the very soul and intent of the music. The Primare convincingly captured the tempo and the pathos, the sheer power and the technical splendour of the performance.

I enjoyed the way the music was afforded the freedom to fill the room with sound, making the most of the LS50 speakers’ generous sweet spot and superb transparency to unshackle itself from the electronic bonds.

The amplifier’s timing was exquisite, allowing the agile, eloquent strings to shine and sparkle, while it wasn’t in the least intimidated by the recording’s often challenging dynamic swings. It’s focus on the music remained unwavering and convincing.

At the same time, the Primare created a sense of space and immediacy that allowed the ensemble and soloist Marianne Thorsen to come to sonic life, and to weave a vivid, emphatic and ultimately engaging music picture.

Primare components have a tradition of over-delivering on their sonic promises, and that’s certainly the case here.

Any concerns that the use of the generic Hypex amplifier modules, or the reduction of the amplifier’s footprint, would impact negatively on the i15’s performance are quickly and emphatically dispelled: this is a gutsy, lively and compelling amplifier.

The Prisma functionality is a major boon, adding a comprehensive and well-integrated package of streaming and network playback capabilities, together with Chromecast-aligned features, to the Primare party. Control and ease of use via the Prisma app is admirable, too.

The smaller form factor makes for a less obtrusive shelf presence that will please some, and is certainly more easily integrated into lounges and living rooms, while still exuding a sense of Swedish style.

Most of all, the i15 always compels, regardless of genre, delivering its musical wares with an expressive enthusiasm and truthfulness that makes it a joy to listen to.