At a glance, the Epson EH-TW610 projector looks more like a portable business projector than a home theatre model. But despite its compact dimensions and easy portability, it’s quite capable of delivering a big, bright picture

There’s something special about watching a movie on the big screen. As much as the latest-generation TVs have grown bigger, slimmer and more intelligent, they still can’t emulate the movie experience delivered by a good projector and screen.

For most, the notion of a home theatre projector is associated with high cost – not only to acquire the projector, but also the need for a dedicated home theatre room. But in reality, stepping up to a projector-based home theatre system doesn’t have to be cripplingly expensive.

The Epson EH-TW610 makes a good case for affordable, use home theatre. The 3LCD projector is compact and lightweight, offers a bright display with vivid colours, and features Full HD image quality.

Okay, so it’s not 4K, but then, the 4K Blu-ray catalogue is only starting to expand, but the cost of the discs is high – and you’ll need a 4K disc player, too. And besides, good 1080p done right still makes for engaging viewing.

This Epson is also quick and easy to set up, which means you can use it on a coffee table in conjunction with a pull-down screen in a lounge or TV room, if a dedicated home theatre room isn’t a viable option.

It’s easy to mistake the TW610 for one of those portable projectors designed for on-the-move PowerPoint presentations in corporate boardrooms. With a footprint of just 302 x 249 mm, and tipping the scales at under 3 kg, it’s certainly portable.

But as it turns out, the TW610 more than capable of delivering the home movie goods. And yes, it can do PowerPoint, too – or operate as an impactful gaming display, for that matter.

The top panel features a complete control set, duplicated by the supplied remote control handset, while the recessed lens is protected by a slide-open cover. At the rear, multiple connection options include two HDMI ports, VGA, composite video, MHL, and both USB Type A and B inputs.

The Epson also offers 802.11 Wi-Fi connectivity, to be used in conjunction with Epson’s iProjection app.

Adjustable feet allow the projector to be tilted, while the zoom lens and both vertical and horizontal keystone correction correct the picture size and geometry to fit the available screen size, while allowing fairly flexible positioning of the projector itself.

Because it’s so compact and lightweight, the Epson is relatively easy to install. It also means it can double up as a presentation projector, and in fact shares a lot of features more akin to that role than a dedicated home theatre projector.

The zoom lens provides a measure of leeway in terms of the distance the projector is positioned from the screen. It can be set up for front and rear projection, as well as for table-top or ceiling-mount options.

Once the image size and keystone correction settings have been completed, using the Epson is an intuitive affair. It offers an extended list of input options, which even includes the ability to project data wirelessly from up to four sources. It will also accept content via USB from a computer, or show images from USB flash drives.

The Epson does offer on-board sound, which is useful for presentations or temporary installations, but from a home theatre perspective it’s best left muted.

The remote control handset allows access to a comprehensive on-screen set-up menu, but also offers source selection and volume adjustment, as well as direct control of aspects such as colour mode.

From a business presentation perspective, there is a split screen mode that allows projection of two images from two sources – e.g. two computers – simultaneously. You can also play back a presentation from a USB flash drive without the need for a laptop, and control the presentation using the Epson’s remote.

In the interests of keeping things simple, I stuck to the Epson’s home theatre role. It offers four modes – Dynamic, Bright Cinema, Cinema and Game – and in our cinema studio, Cinema consistently provided the best combination of colour saturation, contrast and brightness. 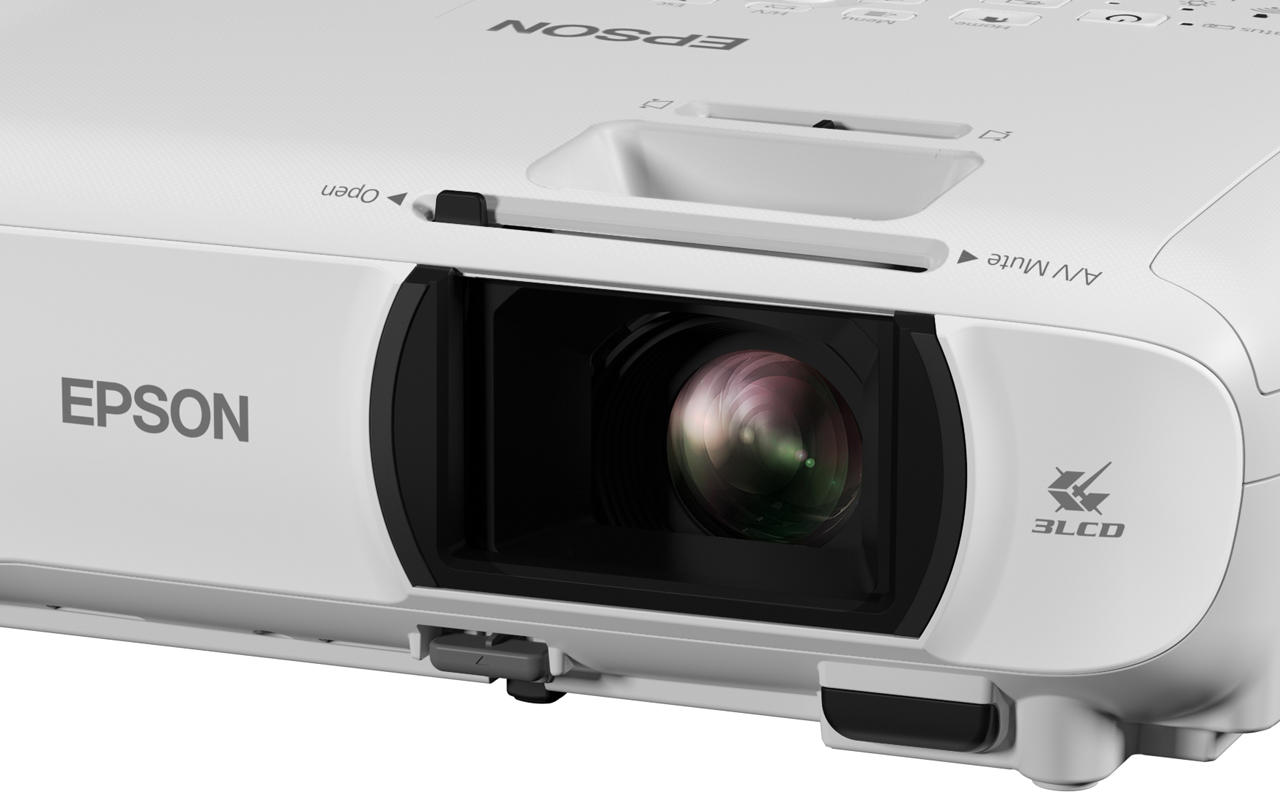 The Epson impressed with its ability to deliver crisp images, even without resorting to noise reduction or the digital sharpening features. On animations, it created almost hyper-realistic detail, while close-ups of faces showcased fine skin textures and elements that augmented an overriding sense of realism.

Running the projector in standard Cinema mode in our darkened AV room, brightness was more than ample: Bright Cinema and Dynamic modes will allow for use in rooms with higher ambient light levels.

Even in standard Cinema mode, it was possible to reduce brightness settings slightly for a more natural rendition. As one would expect, fan noise increases when using the brighter modes, or when switching from eco to normal mode.

In darkened rooms, it’s worth invoking the eco mode and then re-adjusting the brightness settings, thus optimising lamp life while still enjoying excellent picture quality. Overall colour balance and saturation levels were very good right out of the box, and most users will not need to change anything on that front.

However, fastidious users may want to have the projector professionally calibrated – probably worth it in set-ups where the projector is permanently installed.

These sequences are in direct contrast to the ‘real world’ scenes, with real people and real buildings, which show up with grainy and grungy realism. The Epson handled these differences in colour, mood and texture with aplomb, allowing a strong visual juxtaposition between reality and fantasy.

Sometimes those worlds blur – the real world being watched via the video streams from drones looking for individuals, for instance. Those views are cold and washed out, while the real world exposed believable skin tones and textures. 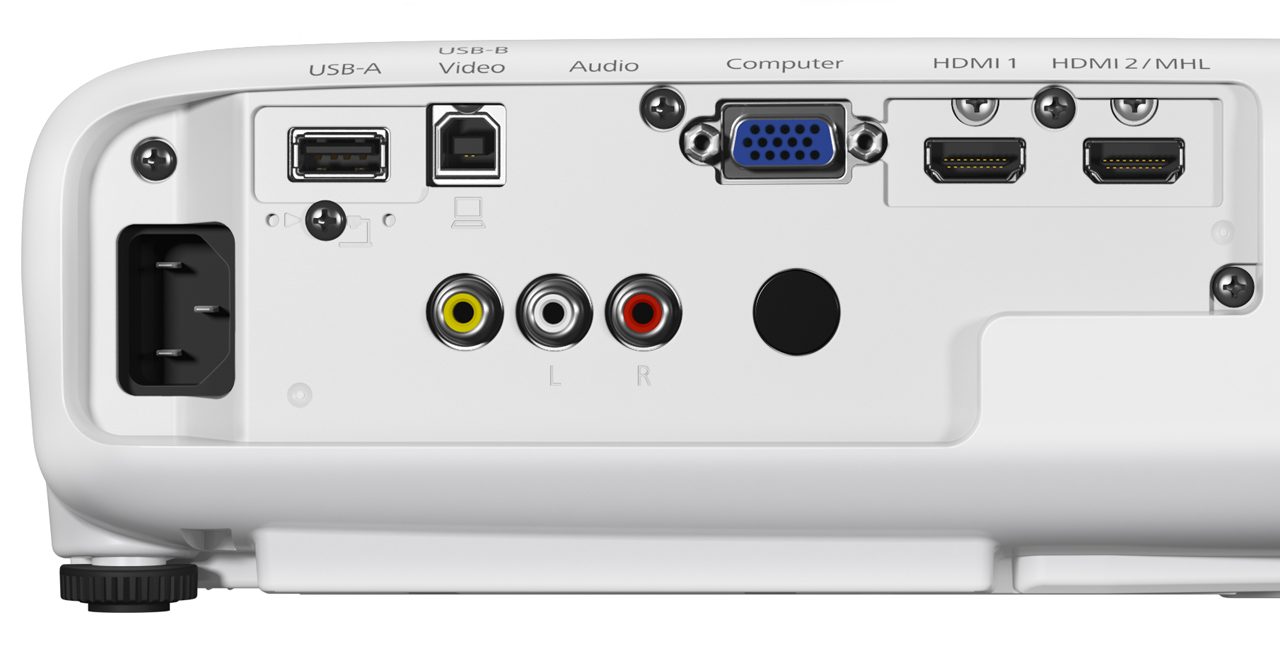 Buildings were rendered in rich and vivid colours, complete with their patina and grain, while textiles appeared realistic enough to touch, and metals had a burnished gleam.

Overall, detail was consistently sharp and crisply presented, while motion was smoothly rendered.

The Epson easily kept up with the action sequences, and managed to prevent dark scenes from looking murky by making excellent use of available brightness against inky-dark backdrops. The vivid detail allowed the projector to create a powerful sense of realism.

Pearl Harbour’s visuals ooze a rich vintage warmth in line with the period. Golden fields, rich reds, three-dimensional corrugated surfaces create a step-in sense of being there, with just enough grain to create a sense of historic heft.

The Epson was able to believably capture the ocean’s sheen, the bright chromework on vintage cars, and the blurry, sweaty faces of pilots in action. The aerial footage made for captivating viewing, while the action sequences when the naval base is attacked appeared almost viscerally real in their intensity.

The Epson EH-TW610 is a versatile, well-equipped projector with strong levels of brightness and contrast, a real talent for fine detail and fast action, and plenty of connectivity options.

It’s well up to the task of delivering the movie goods in a dedicated home theatre space, and it’s bright enough to deal with high ambient lighting in rooms that cannot be darkened, or when you want to watch sport in an illuminated environment.

It’s also compact and portable, making it easy to use in different roles and spaces as and when required. Add a portfolio of business-focussed features, and the Epson represents a lot of projector for the money.